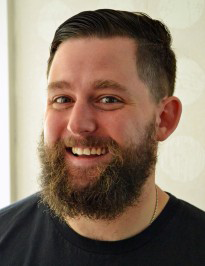 Pierre A. Lamielle is an award winning cookbook author, chef and illustrator.

Raised in North Vancouver, BC, Pierre completed the graphic design and illustration program at Capilano College. Shortly after graduation, he landed a gig at the Vancouver Sun as a feature designer. He worked for both the Vancouver Sun and the Province newspapers before moving to Calgary where he scored a sweet side-gig writing a sporadic food column for the Calgary Herald's Swerve magazine. The column combined Pierre's knack for offbeat writing and irreverent illustrations with great recipes.

You can find him in Calgary where he teaches cooking classes, writes a food column for Avenue Magazine and designs the coolest food t-shirts in the whole world at www.foodonyourshirt.com. His newest book, Alice Eats, is a collaboration with long-time friend Julie Van Rosendaal and portrays Alice’s Adventures in Wonderland with recipes, photos and illustrations.