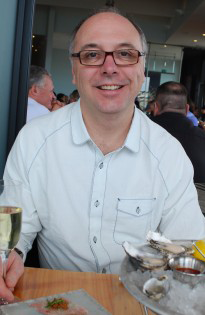 âEric Akis has been a food writer for the Times Colonist newspaper, in Victoria, since 1997.

His popular bi-weekly food column also appears in newspapers across Canada, including the Calgary Herald, the Vancouver Sun, The Province, the Hamilton Spectator,the Ottawa Citizen and the Edmonton Journal.

Before becoming a journalist, Eric trained to become a professional chef and a pastry chef. He worked for 15 years in a variety of operations in Ontario and British Columbia, from fine hotels to restaurants to catering companies.

Eric Akis was born into a military family in Chicoutimi, Quebec, and has lived in six provinces. In 1992, he moved to Victoria, BC, and now makes the city his home, living there with his wife, Cheryl Warwick, also a chef, and his son, Tyler.

Wines You Should Try: A Guide for Canadians
View This Title
Featured Author